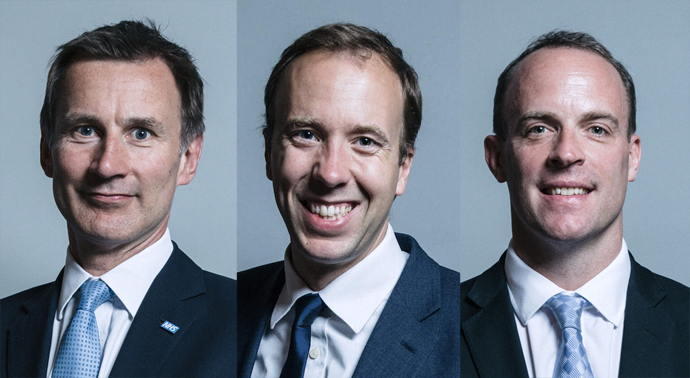 When the new ministerial appointments were made this week, following the Brexit exits of Davis and Johnson, something very significant struck me about Jeremy Hunt being promoted to Foreign Secretary, Matt Hancock taking his place as Health Secretary and Dominic Raab becoming the new Brexit Secretary.

If you watch or listen to their media interviews, each of them is an excellent performer. I don’t mean what they say, but how they say it – the way they handle tough questions, their demeanour, tone and body language.

Any aspiring politician or business person should take a closer look at these three ministerial musketeers, swashbuckling their way through interviews, if they too want to get on and get ahead.

Politics and business has its colourful characters – think Branson and Boris – but when the waters are choppy, there’s a lot to be said for having key figures who come across as “normal”. Slot Hunt, Hancock and Raab into any office and you can’t imagine them being flustered when the air-con breaks down in a heatwave. All three look fresh-faced (Hunt’s the eldest at 51!) and unruffled. One of the best operators of this type in business is Justin King, former boss of Sainsbury’s – he’s not being grilled here, but just look at his manner and overall demeanour – it’s textbook stuff.

With subjects as controversial as the NHS and Brexit, even interviewers can sound rather worked up at times, but the trick for any interviewee is not to reflect that. Just listen to how Radio 4’s Today presenter Nick Robinson asked Hunt on Monday, “On behalf of the Conservative party, would you like to apologise for the appalling mess this has become?”. Hunt replies calmly, but firmly, “I think it’s a ridiculous thing to ask any politician to apologise for trusting the people to make a decision on something as important as Brexit.”

Of course that’s not what Robinson asked, but flattering the British public was a very canny response on the spur of the moment!

Hunt sounded every inch a “safe pair of hands” on a day when the Government ship was beginning to look like a cork in a whirlpool. By the end of the day he’d landed one of the four great offices of state, Foreign Secretary. Was that media interview effectively a job interview? If so, it worked.

Like Hunt, Dominic Raab projected a similarly robust, but calm tone with Robinson here – he gives strong rebuttals with confidence under pressure.

As I highlighted in this previous blog post, interviewees who “speak human” are always going to resonate with an audience – something Hunt did during interviews about the junior doctors dispute in 2015. He was the one who showed the best bedside manner. Hancock does  something similar too in this interview with Justin Webb, as they discuss that dullest of topics, ultra-fast broadband – in clear, simple language he refers to a “patchwork”, “a piece of fibre going all the way to your home” and “digging holes in the ground”.  It ain’t rocket science.

So when you next see or hear Hunt, Hancock and Raab being interviewed, note how their media performances have much in common – they’re well briefed, robust and speak the language of those they wish to reach. You might not agree with everything or anything they say, but you’ll understand what they say, You’re not distracted by an unruly mop of blond hair or talk of polishing turds. Take note business executives – if you want to get ahead, master the microphone.

If Theresa May wants her ministers to make positive headlines about Government policies, rather than for their choice of colourful language, she looks to have picked three good operators.

Her only problem now, given her arguably vulnerable position, is that they might just be too good…