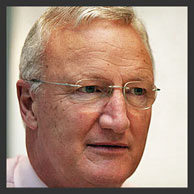 Andrew Harvey spent 23 years as one of the main news presenters on BBC TV News, followed by five years at ITN. He has been media training for 30 years.

Andrew was one of the main news presenters on BBC TV News. During his time at the BBC, Andrew fronted all their daily news programmes. More recently he was senior presenter on the 24-hour ITV news channel. He covered many major events in that period, from 9/11 and the London bombings in 2005, to nine general elections and two Royal funerals.

As an independent producer he has made corporate programmes for clients such as Lloyds Bank, Tesco and the AA. He has won awards for writing and producing programmes on Aids and meningitis (he is President of Meningitis Now).

“My most memorable ‘interview’ was with Margaret Thatcher as she showed me round 10 Downing Street, and described the pains and pleasures of living there. She apologised about the bikes left lying around in the rear lobby! I had only been allowed in to take pictures for Denis Thatcher’s 60th birthday by pretending to be a photographer.”