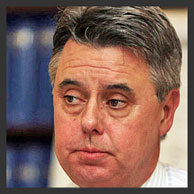 Graham Leach has spent over 30 years working in broadcast news, both studio presenting and reporting from world hot spots. He has been media training for 15 years.

After joining the BBC as a graduate News Trainee, he spent several years based in Belfast covering the early stages of the recent troubles in Northern Ireland. He reported the bombings that shook central Belfast on ‘Bloody Friday’ and interviewed many political leaders, including Rev. Ian Paisley and Gerry Adams.

This was followed by a spell in London reporting on major national and international news stories. He then spent seventeen years travelling the world as a BBC foreign correspondent with postings in Bonn, Beirut, Johannesburg and Brussels.

Graham was trapped in west Beirut for three months when the Israelis invaded in 1982. He witnessed the collapse of apartheid in South Africa. He was in East Berlin on the night the Wall came down in November 1989, passing through Checkpoint Charlie from east to west when the gates opened at midnight. He then reported on the collapse of the communist regimes in Czechoslovakia and Rumania. He also covered the European Union, including the many battles between British governments and Brussels.

He has presented the flagship ‘Today’ programme on BBC Radio 4, the breakfast programme on LBC and then reported for the 24-hours news team at Sky News.

“I interviewed President Idi Amin of Uganda at Entebbe airport ten days after the Israeli raid to free hostages from a hijacked plane. The Ugandans wouldn’t let us into the country because they didn’t want us to report on all the violence that was taking place. So Amin came to the airport to be interviewed. After the interview he took me for lunch at an airport restaurant. I had food poisoning for the next three days.”